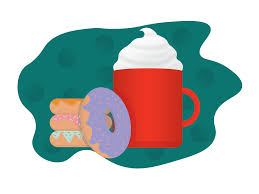 I recently started flirting with a cute security guard at my work parking lot. He eventually asked to be Facebook friends then for my phone number and of course I agreed.

When he asked how could he see me outside of the parking lot setting, I told him to figure it out and then let me know. Eventually, he came back with we could go to his place and play the game Trouble. I asked him to do better but then he said he couldn’t so I countered with getting a coffee at Dunkin Donuts. He doesn’t drink coffee and neither do I so I said I would have a hot chocolate and he can get a water and donut. He told me we should do it today after he finished work. I said ok and then he said he needed to check out two apartments since he needs to move before the end of the month. I told him to give me a call when he was done to let me know when he is ready to meet at Dunkin Donuts. He agreed. I went home, fed my fur babies, prepped onions, tomatoes and other vegetables so my sister could cook and waited for his call.

So the call never came nor did a text to say sorry I can’t meet today and propose a different day. I was done. He showed me who he was (a man who cannot keep his word to me) and I believed him the first time.

I did talk to him a few days later and I did not bring it up …… nor did he. My male bestie believes that the guy might have thought I was joking or he was joking with me or he was clueless or ….or….. I told bestie that those explanations were not necessary since I watched the guy’s actions or lack of action and I believed his actions.

I downgraded him from “potential” and back to “dude I say hello to”.

View all posts by Olusala Sisters

This is a text widget, which allows you to add text or HTML to your sidebar. You can use them to display text, links, images, HTML, or a combination of these. Edit them in the Widget section of the Customizer.
%d bloggers like this: